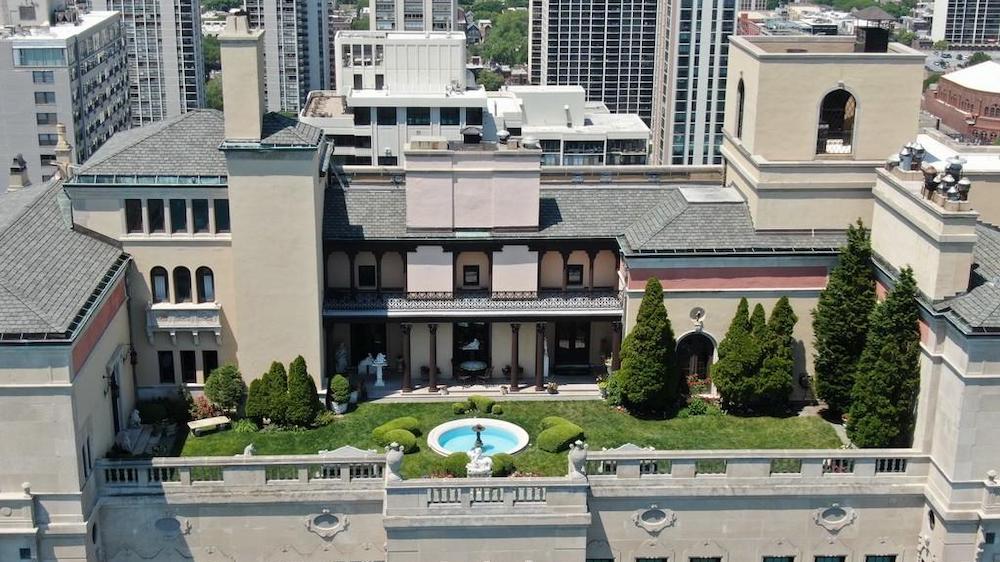 Listing agent Mark Icuss has seen his share of jaw-dropping interiors at penthouses and luxury homes in the two markets he handlesâChicagoÂ and Jackson Hole, WYâbut a new listing sits at the apex. Literally.

Owned by only three families since it was built in 1928, this 8,000-square-foot penthouse is perfectly positioned on North Lake Shore Drive in downtown Chicago, with commanding views of Lake Michigan. It’s now available for $17 million, a price that puts it in fourth place in the ranks of the most expensive listings in the Windy City.

However, there’s no competition when it comes to the layout of this rooftop residence. Sitting atop a 23-story building, it includes an awe-inspiring, unobstructed view from a 5,000-square-foot, east-facing private terrace. To top it all, it includes a manicured lawn, water fountain, and mature trees. Most penthouse residents don’t need to budget in the expense of a gardener, but this green expanse is worth it.

Icuss makes the bold claim that it’s âthe best penthouse in Chicago, and also the country.â While preparing to list the Versailles-like penthouse, he dug into the buildingâs history and found much of it âveiled in secrecy.â

Perched on a building designed by the Sicilian American architect Rosario Candela, and spanning the entire top floor, the penthouse was completed in 1930 for a prominent banker, George Woodruff.

This is the first time it has been made publicly available, since the two previous sales were off-market. The current owner has held onto it since the 1970sâand the owner before that had owned it since the 1940s.

âIt is the only Candela-designed residence outside of New York,â says Icuss. âYou were invited to buy into the building. It was, and still is, a premier property. There is not an outdoor space on a building anywhere in Chicago like this.â

Visitors are whisked to the unit via a private elevator and disembark in a grand formal entry. The layout features six bedrooms and 6.5 bathrooms long on Old World opulence.

Icuss told us that the penthouse is a trophy residence and deserves an owner who isn’t simply looking for a short-term stay.

He thinks a buyer âwill probably own it for 20 to 30 years,â adding, âif history repeats itself, whoever buys the place will take on a bit of restoration.â

Which doesnât mean the penthouse is crumbling or aging. But a new owner may make some changes around the margins and personalize the place a bit.

The new owner should also be someone who continues the tradition of preservation. The original features, like the hand-carved doors, bronze hardware, stone carvings, vaulted ceilings and frescos, 20-foot coffered ceilings in the living room, and a walnut-paneled gallery hall, remain intact. A buyer may consider a modernization of the kitchen and family room, says Icuss.

âItâs going to be a successful family, somebody who needs space and privacy. This isnât just a penthouse on top of a building,â he says. âFolks who can afford to buy this kind of stuffâthey pay for uniqueness.â

The post Listed for $17M, the ‘Best Penthouse in Chicago’ Is a Rooftop Residence Unlike Any Other appeared first on Real Estate News & Insights | realtor.comÂ®.