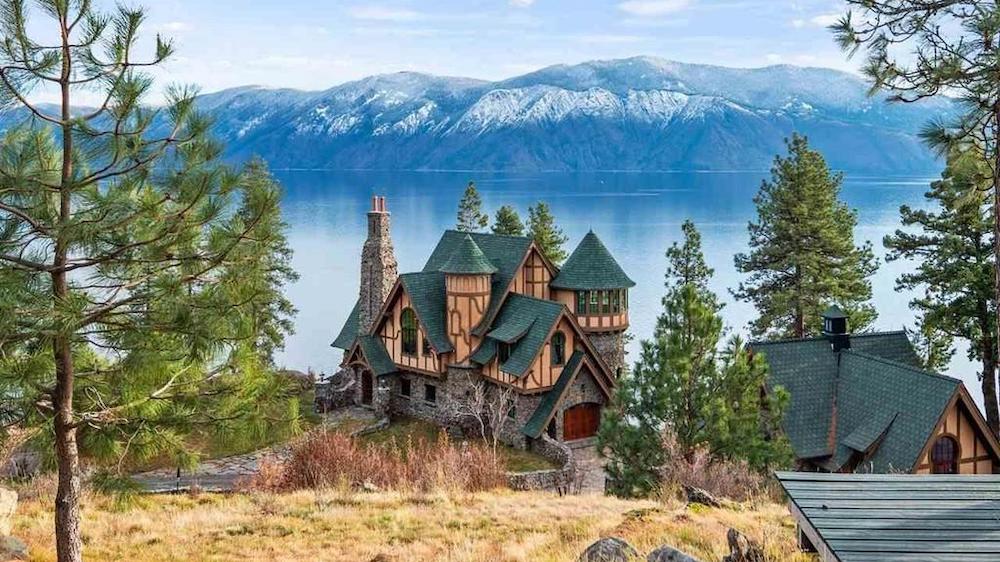 A house in Idaho that looks as if it belongs on the cover of a book of fairy-tales is on the market for $8.95 million.

âI named it Storybook Mountain Estate because it is just right out of a storybookâfashioned after storybook type of architecture,â says the listing agent, Cindy Bond.

She tells the tale of how the owner sat down with her and brought out five small toy houses that looked like Christmas ornaments and placed them on a table in front of her.

âHe put his hand out,â she says, âand said, âThis was my inspiration. This is what I wanted to create and wanted to bring to life.ââ

Five buildings are on the 30-acre compound on Gold Coin Lane in Sagle, ID, on the banks of Lake Pend Oreille, Idaho’s largest lake. Theyâre perched about 150 feet above the lake, with views of the Green Monarch Mountains and the lake from almost every angle.

âWhen you look at those views, you could be somewhere in Europe out looking over the ocean,â Bond says. âThatâs actually one of the most fascinating things about Lake Pend Oreille: Itâs such a large body of water that youâre sure youâre on the ocean. Theyâre just beautiful and magnificent.â

The land has about 800 feet of lakeshore, and a winding path leads down from the main house down to the waterfront.

Watch: This Wacky Circular Home Has Our Heads Spinning

The five buildings include eight bedrooms, on a total square footage of 9,342 square feet. The project took 15 years to complete.

The main house is a storybook dream, with its turrets, stone, and archways.

Imported red clay tile floors run throughout the home, which has cozy nooks as well as large rooms perfect for entertaining.

The kitchen is built to take advantage of the views, and it features Thermador and Miele appliances, as well as a storage pantry and prep kitchen. The large, curved island and the countertops are granite.

An iron spiral staircase connects the third and fourth floors and leads to a round room on top of a turret known as the Turret Aerie. For those who don’t want to climb the spiral stairs, an elevator connects all four floors of the home.

The master bedroom suite takes up more than half of the second floor, and includes a reading room, bathroom, closet, dressing room, and laundry room.

The lowest level has another kitchen, a home theater, a game room, and another bedroom.

In addition to the main home, the property includes four other structures: a two-bedroom gatehouse, a carriage house with one bedroom for guests, a one-bedroom boilerhouse carved into the mountainside, and the charming Dean Mine Cabin. That quaint, gabled structure has a water tower, water wheel, and gazebo.

âOne of the accomplishments that the sellers were so proud of is creating something that was a perfect blend of modern quality but enchanting and kind of historic-looking,â Bond says. âItâs their fantasy that they created and made real.â

Although the property is extremely private and is adjacent to national forestland, it’s only 25 minutes from the town of Sandpoint, ID.

She adds that the population in this area is sparser than in the adjacent Kootenai County, where you’ll find Lake Coeur d’Alene.

The house is accessible year-round, and Bond says he feels the perfect buyer would be someone who appreciates refined finishes and a magical setting.

âI don’t see someone living here with young children, because of the high cliff setting,â he says. âIt’s going to be someone with an artful eye, who wants that pristine view and privacy, but still be connected when they want to be.â

The post Storybook Mountain Estate in Idaho Looking for Its Happily Ever After appeared first on Real Estate News & Insights | realtor.comÂ®.